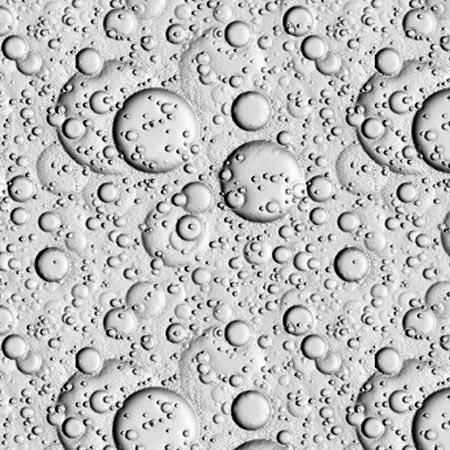 Unfortunately, the simulation modeling cannot use real topography as its starting point.  First of all, we do not have adequately-detailed elevation data for any cratered surface on any planetary body, even the Moon.  Secondly, all cratered surfaces on Mars have been modified by erosional and depositional processes, so that even if topographic data were available, we could compare it only with the end result of modeling.  The laser altimeter of the Mars Global Surveyor will hopefully provide enough data to permit such comparisons in the future.

The cratered surface shown to the right is simulated by a Fortran program that essentially shoots imaginary projectiles of various sizes at random locations onto an initially level surface to create a cratered landscape.  The actual cratering process is not simulated, only the net excavation and deposition produced by the impactors.   The shape of the craters is taken from measurements of individual fresh craters on Mars using a technique called photoclinometry, which uses shading variations on a an obliquely-lighted surface to infer topography (also called "shape from shading") (Craddock, R., Maxwell, T, and Howard, A., 1997).  The cumulative number, N,   of craters of diameter greater than a given diameter, D, is assumed to diminish as a power function of D:

For the simulation shown above the exponent, a, is 2.0.  The target domain is assumed to be about 100x100 kilometers and craters down to 1 km and up to 50 km in diameter are simulated.  Note that in this simulation there is "edge-wrap" from top to bottom and left-to right of the simulated terrain.   The area shown in the illustration is bigger than the target domain, and the image repeats vertically and horizontally much like a wallpaper design.  This was done to provide appropriate edge conditions for the erosional simulations discussed elsewhere.   If the early Mars atmosphere were very thick, small impact craters would have been discouraged by breakup and incineration of incoming projectiles in the atmosphere. 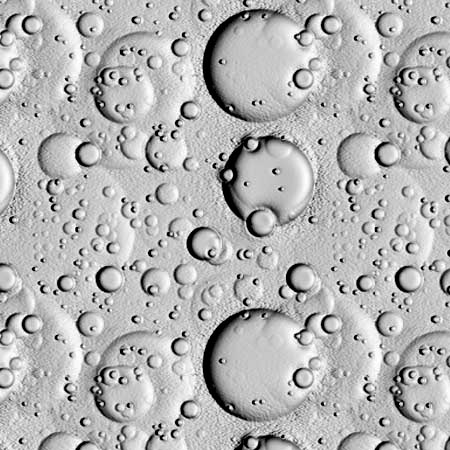 In the second simulation, the minimum crater diameter is assumed to be 1 km and craters less than about 10 km are reduced in frequency as compared to the mathematical relationship shown above.

Several conclusions can be drawn from the simulation:

A copy of the Fortran program that generates the cratered surface will soon be available for downloading.

These cratered landscapes are used as the starting points for programs that simulate modification by: