The geomorphology of drainage basins has been studied at the University of Virginia through a series of theoretical and simulations models. A bibliography of these studies is available. An example simulation is shown below. 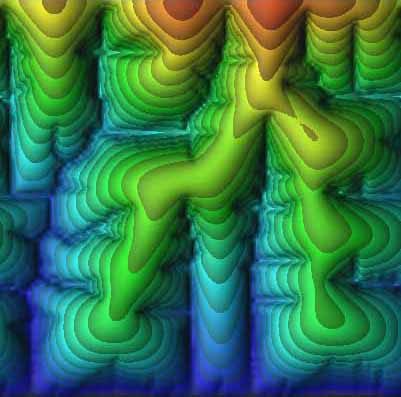 This is a drainage basin developed in response to a steady rate of lowering of the local base level, which is the lower boundary. The upper boundary is forced to be a drainage divide, but the lateral boundaries are periodic, that is, what flows out one side reenters on the opposite side. The initial conditions were a very flat surface with slight random (fractal) relief. The two processes that form this drainage basin are diffusive soil creep, which creates rounded ridge crests and slopes, and erosion by water running off of the land surface. The creep rate is proportional to the steepness of the land surface. Water erosion is in proportion to the shear stress exerted by the flow on the channel bed, with a critical shear stress required to initiate erosion. The shear stress is a power function of the total area contributing water and the local channel gradient. The specific location of the channels and slopes were not specified in advance, but rather the division of the landscape into convex slopes and concave, branched channels occurs spontaneously as the original random relief becomes dissected as the lower boundary is lowered.

The simulation program consistes of several fortran files. At present it is poorly documented, but the programs and two DOS/Windows executable files are available in a ZIP file