Most of our knowledge about how landforms have evolved on Mars is based upon interpretation of images taken by the Mariner and Viking Orbiters and the Viking and Pathfinder Landers.  Interpretation of surface features and the processes that have created them is primarily based upon comparison with similar terrestrial features and some rudimentary scaling arguments.  In a few cases, such as transport and deposition of sediment by wind, mathematical scaling and laboratory experiments under Martian atmospheric pressure has allowed a more quantitative assessment of Martian eolian processes.  However, many landforms on Mars remain enigmatic -- the processes, environments, and constituent materials involved in their formation are either totally uncertain or subject of a variety of interpretations.  This is particularly true for channels and valleys on Mars, as well as the extensive heavily cratered terrain, which has a morphology very different from cratered landscapes of airless bodies such as the Moon, Mercury, and many outer planet satellites. 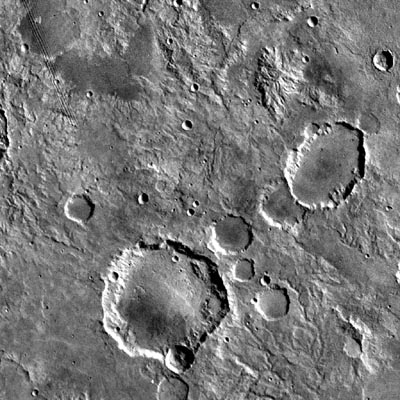 Because of these differences, most planetary scientists have concluded that erosional and depositional processes have strongly modified the original cratered landscape, both during and subsequent to the final stages of planetary accretion by asteroidal and cometary impacts.  Some of the unique features of Martian heavily cratered terrain are the near absence of craters less than a few kilometers in size (except for a scattering of fresh craters that have occurred subsequently to the period of heavy bombardment), subdued relief on larger craters (no obvious outer rims and shallow, flat floors lacking central peaks), and, locally, dissection of the inner crater walls and inter-crater plains by dendritic valley networks.

On Earth there are no comparable landscapes of partially-eroded heavily cratered surfaces.  A "swiss-cheese" terrain with depressions of a range of sizes is a considerably different starting point than any surface on modern Earth.   Therefore, to understand how surface processes have modified Martian landscapes we can only rely upon interpretation of images from orbiters and landers, and, as discussed here, computer simulation of erosion.  The interpretation of images has so far been inconclusive about the environment and erosional processes on early Mars (about 3.5 to 4.2 billion years ago).  Interpretations range between two endpoints: 1).  Mars had a dense atmosphere (perhaps several times denser than present Earth atmosphere), abundant water with precipitation as rain or snow, so that weathering, mass wasting, and erosion by water modified the cratered terrain;  2).  The atmosphere may have been thick or thin, but surface temperatures were almost always below freezing, and channel features formed as a result of water released to the surface locally from the impact-generated regolith and fractured rock by heating due to volcanic intrusions or impact heating.   The research outlined here models the modification of cratered terrain by a variety of processes, including weathering, mass wasting by creep or landsliding, precipitation-driven runoff, erosion by groundwater seepage, and wind-induced (eolian) erosion and deposition.  Preliminary results are presented below in topical order:

Comments and suggestions are welcome:  mailto:ah6p@virginia.edu