Heavily cratered terrain on Mars was created between about 4.2 to 3.8 billion years ago during the period of "heavy bombardment" that is recorded on most of the solid bodies of the Solar System whose surfaces subsequently have not been extensively modified.   This period of numerous impacts of asteroids, proto-planets, and comets was the final period of "sweeping" up of the countless small objects that had formed during the early stages of the solar system.  Most surfaces on airless bodies that have not been subsequently modified by volcanism are "saturated" in craters of all but the largest sizes -- that is, any new impact destroys, on the average, an existing crater of similar size.  The highlands of the moon are an example.

Surfaces on Mars that date to the period of heavy bombardment are different from the Moon in that processes other than cratering have modified the surface both during and, to a lesser extent, subsequent to the cratering epoch. 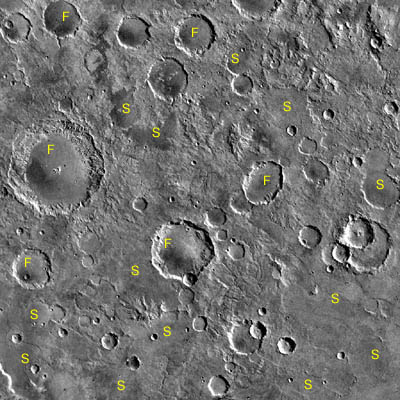 This image shows an area in Mars in the region "Terra Tyrrhena" at about 285 degrees west longitude and 5 degrees south latitude and shows an area about 500x500 kilometers.  It is fairly typical of areas of the heavily cratered terrain that have been extensively modified during and immediately after the period of heavy bombardment.  Most of the large craters have very smooth floors (indicated with "F" in some of these craters) and only a few, small central peaks occur in the larger craters.  A few short channels and fragmentary dendritic valleys occur in this picture but are better illustrated in close-ups shown below.  Few small craters are found, except for the scattering of very fresh craters that formed subsequent to the period of heavy bombardment.  Rather, there are broad, nearly craterless expanses called "intercrater plains".  Parts of the intercrater plains are rough and locally strongly dissected by fluvial incision and mass wasting.  Other parts are smooth surfaces (some are indicated by "S") that may be areas of deposition of dust, fluvial deposits, or possibly lava flows. 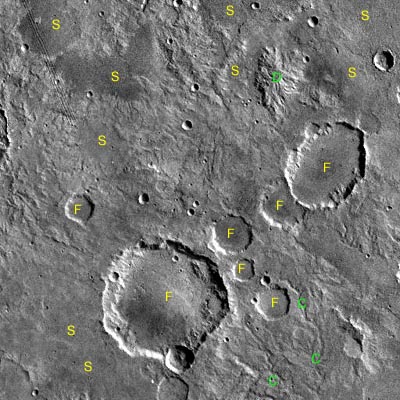 This image is an enlargement of the central part of the above image, showing again the flat-floored craters that are probably filled with sediment ("F") and the smooth portions of the intercrater plains ("S").  Many of these smooth plains are clearly totally eroded and/or infilled impact crater basins.  Some of the more obvious channel systems are shown by "C" and several other shorter channels are present but not labeled.  The broad upland labeled "D" is heavily dissected by channels into numerous small drainage basins, and looks much like eroded isolated mountain massifs on Earth.  Much of the rest of the intercrater plains is fairly rough, with branching, wandering ridges and scarps sometimes enclosing the ghosts of nearly totally obliterated craters. 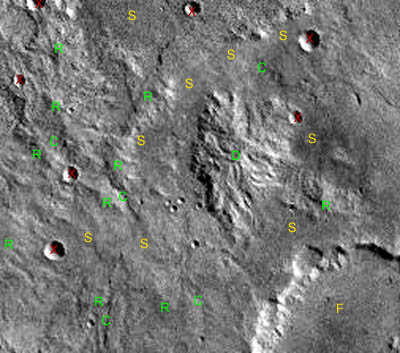 This is a close-up of the dissected upland "D" and its surroundings, with some channels "C" and ridge systems "R" also labeled.  Smooth areas "S" are probably filled with wind- or water-transported sediment, as the the flat-floored crater "F".  The larger post-heavy-bombardment fresh craters are shown by "X". 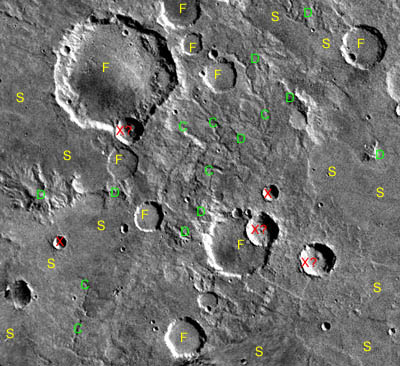 This is another close-up of part of the first image in this section, showing flat-floored craters, "F", Smooth "S" and dissected "D" intercrater plains.   Some of the channels are indicated by "C", and young, fresh craters are shown by "X". 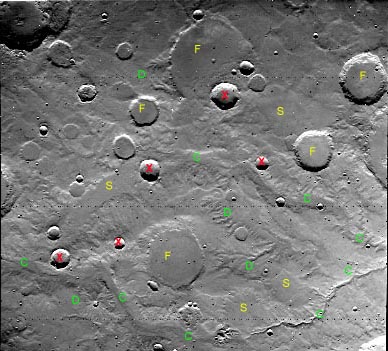 This is an even more heavily modified area in the Margaritifer Sinus region at about 15 degrees west and 28 degrees south, showing several larger channels that are part of a valley system that extends several hundred kilometers.  The image is about 200 kilometers across.  The notation is the same as above. 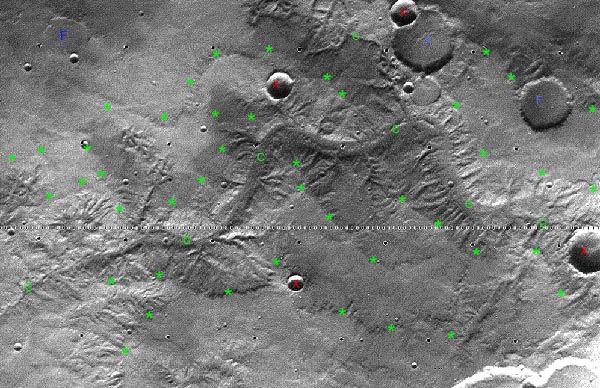 The above image shows part of Parana Valles in the Margaritifer Sinus region of Mars at about 15 degrees west and 21 degrees south.  This image is about 180 kilometers across.  The region surrounding Parana Valles is heavily dissected by small, crudely dendritic channel systems into numerous drainage basins.   Some of the drainage divides between basins and the scarps at the head of the dissection are shown by "*".  Downcutting by the throughflowing Parana Valles probably created the relief that allowed the heavy dissection over a region about 40 to 50 kilometers wide on both sides of the main channel. 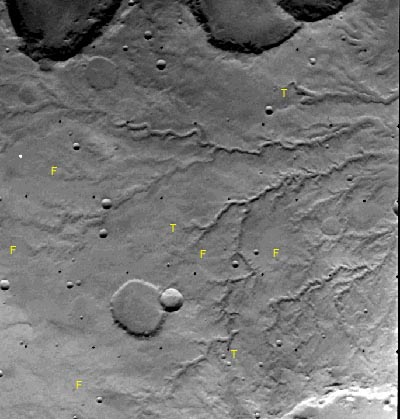 This shows one of the more well defined dendritic valley networks on the heavily cratered terrain in Margariter Sinus at 10 degrees west and 23 degrees south.   The image is about 180 kilometers across.  Some of the valley heads appear to terminate abruptly in rounded headwalls ("T") that have been cited as evidence that erosion (sapping) by groundwater emerging to the surface has created the valley networks, because similar "theater-headed" valleys are found where groundwater sapping occurs on Earth.  In other places, however, the valleys just seem to gradually merge with the inter-crater uplands or to feather out ("F"), suggesting a more diffuse origin of drainage from the surface or near-surface.

The probable processes that modified the Martian cratered terrain include eolian deposition and erosion, fluvial erosion and mass wasting, and groundwater sapping.