Movement of fine material by the atmosphere is a ubiquitous process on Mars and many landscapes appear to have been affected by eolian deposition and erosion.   Depositional features include dunes resulting from deposition from rolling and hopping grains (saltation)  and widespread fine-grained sediments apparently settling from atmospheric dust (loess-like materials).  Deposition and erosion of fine-grained dust is responsible for the short-term albedo variations that have been observed on Mars for many years as well as various streak-like color variations on the surface.  Both local and global dust storms are common occurrences.  The layered deposits in the polar areas appear to be a mixture of dust deposited from atmospheric suspension plus ice.   Wind erosional features include large-scale linear grooves (yardangs), microscale pits on rocks (ventifacts), and possible stripping of loose surface sediments.   Several regions on Mars exhibit muted topography that has been suggested to have resulted from eolian deposition.  Eolian dust may arise from erosion of fine-grained surface materials, including weathering products and fine-grained regolith.  In addition, large impact craters and volcanic eruptions can directly inject large quantities of suspended materials into the atmosphere.  Once injected into the atmosphere by winds, volcanoes, or cratering, the dust settles in areas of low wind velocity, both on a global scale as well as universally in sheltered locations. 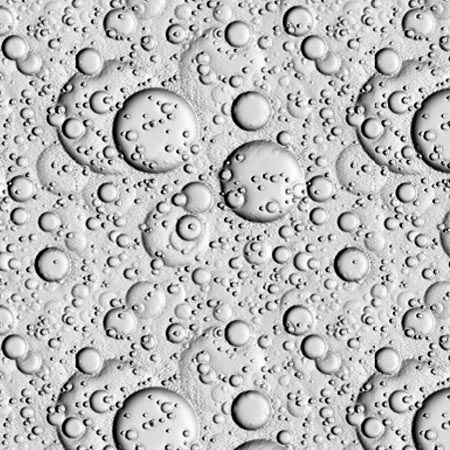 A model of eolian erosion and deposition starts from a simulated cratered surface, as shown to the right.  If eolian deposition or erosion occurred uniformly everywhere, the landscape as a whole would rise or lower without change in form.  A more reasonable hypothesis, however, is that erosion and deposition will depend upon the abilities of the wind to either strip sediments from the surface or to prevent their deposition.  This will depend upon how exposed the location is.  The potential for erosion or deposition at a point on the surface is evaluated by looking around in eight compass directions from the given point and determining a weighted average of the look angle relative to the horizon of points lying along the eight directions.  A point in a depression will have positive look angles to surrounding points, whereas a high point, such as on a crater rim, will have negative look angles.  The summary "exposure" index is a weighted sum of all of the negative of the look angles in the various directions, weighted by a negative exponential function of distance (that is, the look angle to nearby points is given stronger weighting than faraway points).  Points that are hidden behind a higher point are not counted in the weighting.  The erosion and deposition rates are a function of the exposure index, with highest deposition for a negative exposure index in depressions (up to a maximum deposition rate) and either no deposition or erosion for level surfaces (zero index) or areas of positive exposure. 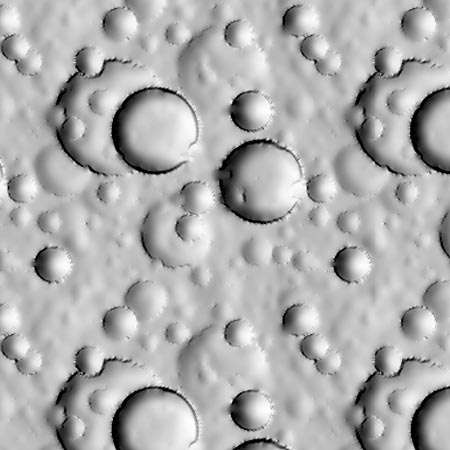 This image shows the above cratered landscape after considerable eolian modification.  For this simulation the process has primarily been one of deposition.  Areas that are level or having positive exposure are very slightly eroded.  Areas with negative exposure receive high deposition.  Some downslope mass-wasting of deposited dust is modeled on slopes approaching the angle of repose for loose materials (about 30 degrees), but no other erosional process is incorporated.  Eolian deposition, at least as modeled here, seems to be very efficient at obliterating small craters while large crater rims and walls remain relatively fresh.  The model does not incorporate many important constraints on eolian erosion and deposition, including the effects that terrain has on generating vortices that can enhance or diminish winds locally (these produce the light and dark streaks downwind from craters), or slope winds that can be generated from large-scale topography.  Nonetheless, many areas of Mars appear to have had extensive accumulation of dust in depressions such as channel systems.

A copy of the eolian deposition program will be available for downloading in the near future.