Groundwater sapping is erosion by groundwater that emerges as seeps and springs.   Such emergent groundwater has been suggested to be responsible for erosion of the valley networks on the ancient cratered terrain of Mars as well as other channels on Mars.   Groundwater sapping has been proposed for several reasons.  Some of the valley networks appear to be deeply incised into the intercrater uplands with steep sidewalls and abrupt terminations in "theater-like" box canyon heads.  The apparent density of channels on the uplands appears to be small, and of uneven spatial distribution, as compared to water eroded landscapes on Earth. Both of these characteristics are similar to valleys eroded into sandstones on the Colorado Plateau which are eroded by emerging groundwater.  Another reason that an origin by groundwater sapping has been proposed is because current models of the early Martian atmosphere have difficulty maintaining surface temperatures above freezing, even near the equator.  Groundwater sapping is presumed to be able to function at low temperatures because groundwater could remain unfrozen at depth because of the high geothermal heat gradient on early Mars, and water emerging at springs might occur beneath a protective ice cap even at low temperatures.  The unfrozen groundwater might be brought close to the surface by hydrothermal pumping due to water expansion accompanying igneous intrusions or heat generated by crater impacts.  Similarly, upward vapor migration from a deep water table might resupply shallow groundwater supply.  In addition, even if precipitation occurred at the Martian surface, much of it might have infiltrated downwards to the the permeable impact-produced "regolith" to emerge in lowlands as springs.

Initial groundwater sapping simulations examine the case where water infiltrates underground from surface recharge and emerges in lowlands.  A simple model of groundwater flow assumes that the horizontal scale of flow is much greater than the vertical scale, and that the subsurface has spatially uniform properties.   Infiltrating water flows laterally and emerges in low areas.  This emerging water is assumed to erode the surface materials by the same process laws that were used for fluvial erosion simulations .  Also similar to those simulations, when erosion creates slopes steeper than the the maximum stable angle for loose material, downslope slumping is assumed to occur. 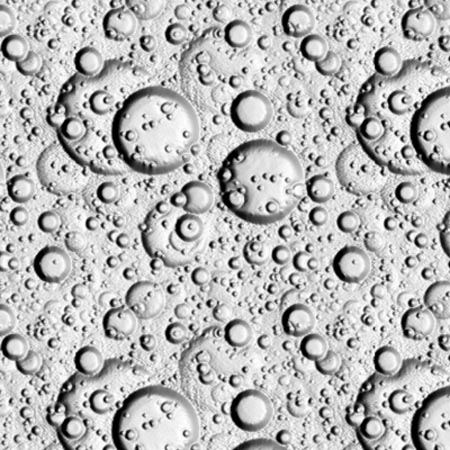 The first image is the same as the cratered landscape shown in the crater simulation modeling except that mass wasting of steep crater walls has occurred.  Groundwater is assumed to infiltrate uniformly over the landscape and to emerge in low areas (primarily at the bottom of inner crater rims).  In the simulation shown here the seepage rates are assumed to be low enough that no permanent bodies of water form. After a period of erosion by emerging groundwater, undermining and retreat of deeper crater rims is apparent. 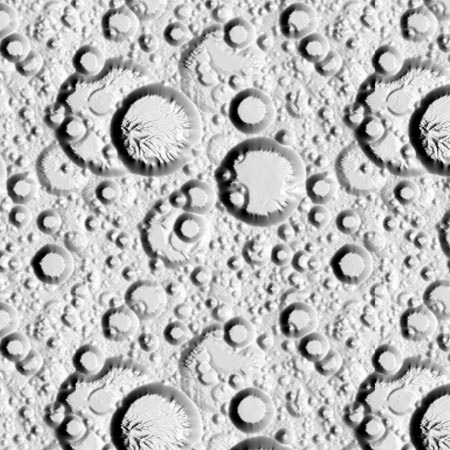 The sediment transported from the zones of emerging groundwater fills in the lower crater floors. Some short, stubby theater heads are formed at the lower crater walls.  An important characteristic of groundwater sapping is that it essentially leaves the intercrater plains unmodified.  Small craters, in particular, are unmodified or only slightly eroded.  If recharge rates were lower than for the simulation shown, water would emerge only at the deepest crater floors.  If recharge rates were higher, more and more of the surface would become saturated, and the simulation would approach that for fluvial erosion. As with runoff erosion, sapping does not produce much erosion on intercratered plains when there is no large-scale superimposed relief.  The following simulation starts from a surface in which there is broad-scale relief on which the cratering is superimposed.   This surface also has been subject to eolian deposition. 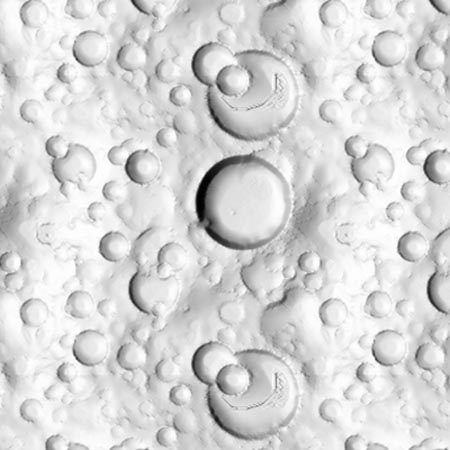 In this image some mass-wasting has occurred, so that slope gradients on crater inner walls do not exceed 30 degrees.  As with other simulations, the area shown is about 160 x 160 km with a repeating topographic pattern at 100 km intervals. After a considerable period of sapping erosion and mass wasting, well-defined sapping channel systems are formed. 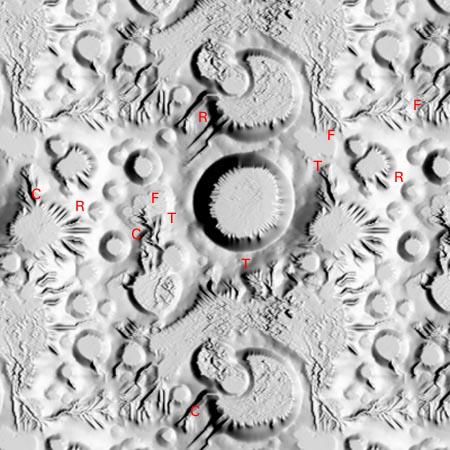 Characteristics of sapping channels include:

In this and the previous sapping simulation the origin of the groundwater that is producing the sapping channels is assumed to be areally uniform.  This is an assumption which is most consistent with recharge from surface precipitation.  Thus in these simulations the major difference from the assumptions of runoff erosion is that water does not directly run off of the surface upon precipitation; rather it infiltrates and then flows laterally to low areas where it reemerges and instigates channel erosion by processes identical to those assumed in the runoff erosion simulations.  The high porosity of both eolian deposits and impact crater "regolith" may contribute to infiltration rather than runoff.

The groundwater sapping simulations are just being started.  Further simulations will examine different initial starting topography, effects of local sources of groundwater (hydrothermal sources), and situations where some ice-covered surface lakes might form.   In addition, combinations of fluvial and groundwater erosion will be examined.